Joining the 92 Club is no easy feat - it takes commitment and dedication as well as a lot of time, money and effort. Fans also need to stick to the rules to call themselves and official member of the 92 Club. That's part of the draw though - it can't be done quickly and that's what makes it so special.

Some fans take decades trying to complete the 92. Follow our tips below to speed up your process of ticking those grounds off.

The FA Cup and League Cup

The cup competitions are a great way of visiting new grounds. Early rounds of the FA Cup are only contested between lower league teams, but the later rounds provide a great opportunity to tick off some of the bigger grounds. A Premier League side drawn at home to lower league opposition will usually reduce their admission prices - and some of them fail to sell-out, so plenty of tickets available for us groundhoppers!

Sometimes ticketing restrictions are put in place for big games (such as local derbies), making it difficult to neutrals to get a ticket. We've found that contacting the home team's ticket office and explaining that you're a neutral can sometimes work... it's a worth a shot if there's a big game you want to go to.

Make use of International breaks

If you support a club in the top 2 tiers of English football, you'll get numerous free weekends where International games take priority as your club's match is cancelled. However, games in League 1 and League 2 can only be cancelled if 3 players from the same team have been called-up for International duty - so usually around 80%-90% of the lower league games take place. These weekends can be a gem for ticking off some grounds as games will kick-off at different times depending on when England play. You could be lucky and have a game on a Friday night, Saturday afternoon and Sunday afternoon (as Sky often televise the lower leagues to make up for a lack of Super Sunday games).

Whilst the really big clubs will be off on tours of the Far East or America, a lot of teams stay on home soil as the football calendar gears up to the start of a new season. Although they can be somewhat mundane affairs lacking in atmosphere, pre-season friendlies do have two things going for them: tickets are usually cheap and games are sometimes arranged on traditional "non-football" days as teams try to play as many games they can fit in before the season starts. It's perfectly feasible to take in 7 games in a week in late July/early August - if you don't mind travelling a bit.

Do not go to EFL/Checkatrade Trophy matches. Football fans are boycotting this competition.

The Champions League's uglier sister doesn't get many pulses racing in the early rounds with some of the so-called bigger teams failing to sell their home allocations (Spurs and Everton have struggled in recent years). On the plus side, this means watching European football can be surprising affordable and whilst you might not be watching Europe's elite, you can still be treated to some pretty good matches and amazing atmospheres under the floodlights.

Check out where each club's reserve, women's and youth teams play - often the games can take place at the main stadium. Women's football is often played on a Sunday and youth teams often play during the daytime in the week - plenty of potential for new grounds there.

Multiple grounds in one trip

Even fans located right in the centre of the country have long trips to contend with - up to the likes of Newcastle and Carlisle as well as down south to ground such as Plymouth and Exeter. Take a note of the kick-off times and days before planning your trips as you might be able to get 2 or sometimes 3 new grounds in over the same weekend.

Live TV means that games are often moved to Friday night, Sunday afternoon or Monday night. It's likely that a long trip (or indeed a trip to the capital) could prsesent the opportunity to take in multiple grounds in the same weekend.

Some teams such as Tranmere and Southend choose to play a number of their home games on Friday nights in order to avoid 3pm Saturday clashes with their bigger neighbours. These are a dream for anyone who's doing the 92 - 2 ticks in 1 weekend!

The 92 Club changes every year, so make sure you plan ahead.

There's no point in ticking off every ground in League 2 if you've not done the other leagues first - the simple reason being that two of the grounds in League 2 will drop out of the 92 Club at the end of each season, to be replaced with 2 from the National League. Your best tactic here is to tick off all grounds from the Premier League, Championship and League 1, and then to spend the time concentrating on League 2. You could also go for a safety ground visit and go to a couple of the top Conference grounds as well - particularly if there's a team which is miles out in front and almost certain to get promoted.

The other thing every groundhopper needs is the knowledge of which teams are planning on moving to new grounds. Remember, the 92 Club only includes teams' current grounds. So, if you've been to Arsenal's old Highbury stadium, you'll need to go to The Emirates to do the 92. There's several moves planned over the next few years from the big clubs such as Everton down to the smaller ones like Brentford and Luton.

This will depend very much on how you view your groundhopping. Personally, knowing that a team is planning to move grounds makes me want to tick off the ground whilst I still can! Those of you who are only interested in doing the 92 may want to leave these team until last, just in case they make the move after you've ticked the old ground off.

Becoming a 92 Club member is expensive. Imagine an average price of £25 a ticket - that adds up to £2,300 and that's for 1 person before you've even thought about petrol, train, accommodation, food, drink and a programme!

There are some tips we can share with you though...

Back in the olden days, fans checking their 92 Club progress had to rely on pen and paper or their own memories. Luckily nowadays, sites such as footballgroundmap.com allow you to keep a digital record and create your own online map. Their 92 Club section shows which grounds you've been to as well as which ones you have left to do. Our friends over there have even created a printed poster which you can stick on your wall and physically tick off the ground you have visited. 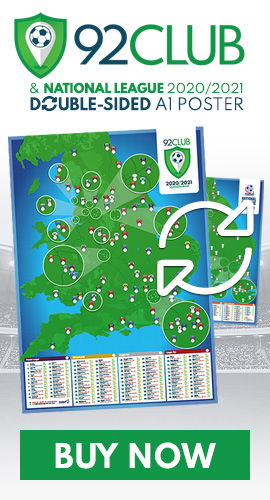